One time I posted about gymnastics and asked cap hoosier how the hell them guys can flip so high and that many times on the floor exercise, is it a trampoline?

Aruss emailed me and said why did you ask cap hoosier that he never discusses gymnastics what would make you think he knows.

I replied because hes gay.

He responded that was rude, but I guess if you had to ask someone on the otf cap would seem logical.

Personally. Don't have a story, never exchanged an email, and never went to any of the tailgates. Wish I had now. He and other always joked I was racist back when I posted here but that's about it. His death has bothered me all day. I used to spend a lot of time on here when I went to IU at my work/study job. He was always posting something awesome. I wish I had gotten to know him and frankly others of you now. Here's hoping his kids and family can somehow manage to cope with the coming weeks.
Posted from Rivals Mobile
M

In the past, ARuss would reinstate me when


Buzz would blacklist me from the WC.....sometimes, ARuss would actually have to wait for Buzz to go through the steps to can me before he could reinstate me....it got to the point that Buzz actually stopped canning me, knowing I wouldn't last two minutes.

ARuss was always upbeat and open, even with people he didn't know very well..he was truly a 'people person' and a giver.

I hated that his life had gotten turned upside down this past few years...he certainly deserved a lot better.
P

when I graduated from IU

I took a job and moved to DC. At first I lived alone and didn't know many people.

I also didn't have cable and had shitty internet. Aruss sent me bootleg entourage dvds and maybe one other tv show as well. A small gesture but something he didn't have to do at all and something I really appreciated and will never forget.

I didn't know him well, but what I knew of him was that he was a good guy. The world is lesser for the loss of Andy. He is gone far too soon. If he was that nice to an e friend like me that he barely knew, I can only imagine what a great dad he was. Too soon. Way too soon.

This is the funny thing about Andy....

it wasn't the funny thing he did or said. It doesn't have anything to do with him being overly witty or over the top. He made me laugh many times, sometimes the hardest when he was poking fun at himself.

What made Andy so unique, was that even through a computer screen you could feel his warmth, sincerity and all around goodness.

The Columbus fight vs Martinsville, the stalking of Hillary Duff and Erin Andrews, the Bee Costume and the fact that 2 days ago he said he would look just like Ogre if he grew his hair out and put on 5 pounds all made me laugh.

But what makes me miss him is that he was such a genuine, good, nice person. It's a sincerity that you rarely see.

Hahaha, he sent me the Entourage DVDs as well....

that is classic
I

I lurked for over a year on the OTF before I posted.

I had a pretty good idea of the inside jokes and how some newbies could get pushed around our ignored at that time.
When I first started posting I made a point to post in threads Aruss was in because I knew it would be read and not immediately attacked. He just made everyone feel welcome.
Posted from Rivals Mobile
D

Well Z, you hit the nail on the head with this one.

I was cleaning out my emails today and I read a couple of his most recent ones to me. He was a great person to talk to and for a person that I never met, it really hit me hard when Charlie text me the news last night.

Meeting him at Cummins

I had posted to the board for a while, and eventually we figured out that we both worked for Cummins. He told me what building he was in and the next time I had a meeting there I stopped by. He was on peegs. One of the first things he said was "wow, you're just like you post." After that we became pretty good friends, yet he would be terrorized every time I had a meeting with his boss thinking I would somehow rat him out for being on peegs during the day. He failed to understand that for me to call that out, I would have to admit that I was also on peegs during the day.

He was such a sweet natured person. I will miss him.

Not my best but was funny nonetheless

At least to us it was funny.

We were hanging out at his house in the basement one weekend night just having some brews. His wife at the time was gone so we were just listening to music, watching some TV and just hanging out low key.

Well I ran upstairs to get another couple beers or something and came back down when all the sudden we hear a hissing sound. We look around and see a possum scurrying around the corner and up the steps. We of course scream like a couple of girls and get as far away from it as possible. Well that damn possum climbs half way up the steps and stops, just lying there staring at us.

After about 30 mins of laughing and calling each other pu$$ies and wondering what to do, we decide to call animal control or someone like that. Of course, the phone is upstairs so one of us has to jump over the thing to go and get the phone. I said it's his house, his phone, his jump! I've never seen a dude jump up basements steps as fast as he did, the possum hissing at him as he jumped it. He made it upstairs and called animal control. As we wait, he stayed upstairs while I was downstairs. We were laughing so hard.


Animal control shows up and of course, it's a chick. She proceeds to walk up to the thing and pick it up by the tail and throw it in a cage. We immediately turned in our man cards. lol


Probably not a super exciting story, but at the time it was quite hilarious.

That's the stuff I will miss. What a great friend he was. 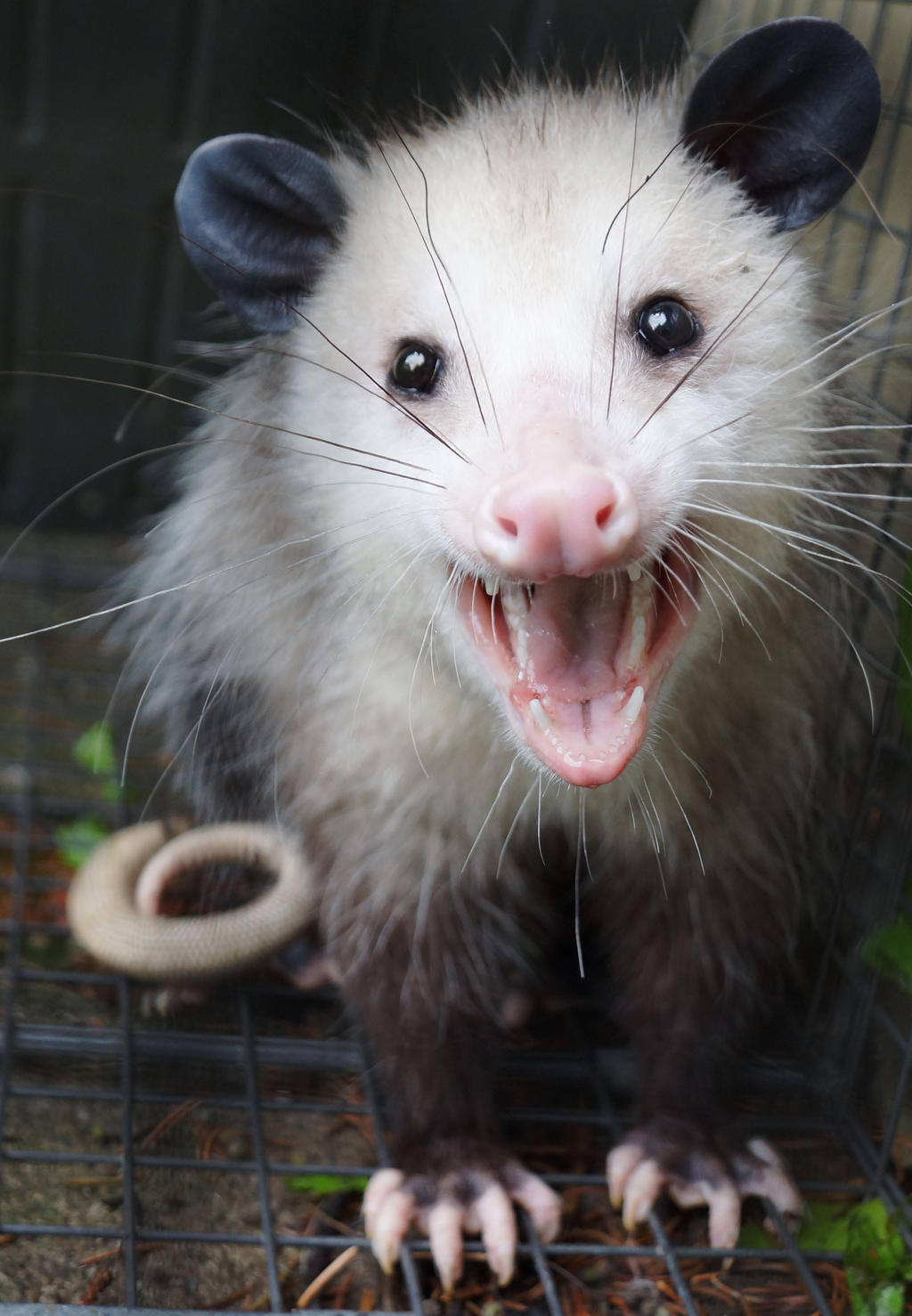 How long did it take you to pry him off of your leg?

I hope you weren't wearing good slacks that day. Or that he paid for your drycleaning.

They have hydraulics at Cummins.


That's what it would take to pry ME off her leg.

go look at Andy's flickr page below that someone posted. The one showing pictures of OTFers. Find BIODTL's picture. That's not me. It's some random douche playing a guitar while lying on a hammock. Andy posted that long ago after first posting Lindsey Buckingham. I told him to remove the Lindsey Buckingham picture. Seriously. Sometime later he replaced Lindsey with that picture. He didn't tell me he posted it. I didn't find out until probably a year later?

I told him countless times to change it. He laughed at me every time I mentioned it. and would tell me "no". It became a running gag. The last time was maybe four years ago in an email. I begged him to change it. He finally relented and told he would remove it. I never checked on it and it's still there.
I

It was more the drool that was a problem

He invited me to a tailgate and got me drunk....or maybe that was Peach.

He had a great sense of humor. He had some charming mischievousness beneath that good guy nature.

I still can't get that picture of you and Peach out of my mind.


And you KNOW which pic I'm talking about (Peach going in for the kill). It doesn't help that I've actually hung out with both of you either.
C

always wondered if that was really you

I coulda sworn that was really you.

I'm probably the one responsible for getting that whole LB thing started back then. You can thank me later.

I'm really sorry you lost such a good friend.

Isn't 'slacks' one of the no-no words?

And moist. There were others.
B

You posted a pic on the OTF of yourself

years ago but blurred out the face.

I wondered. It would be nice to get to meet some of you degenerate a$$holes sometime. Still hard to believe he's gone. Fuuuuuuuu
7

I remember his picture on that one site...

Where he was dressed like a Jihadist to freak out random chatters. What was the name of that site again? It ended up being just a string of people showing dong.

My old picture is tits

as is the big tittied broad I was with.

That was taken at a Poison/Cheap Trick concert at Deer Creek in about 2008 or 2009 I believe. That is back when I used to do pills. Snorts-eat whatever and 78 vette would hound me about not being an asshole and stop taking them. He was right but the concerts was badass.

a wee bit different these days. Hell dude, you're the only OTFer I've ever met. It'd be good to get whoever from The Fort together and watch a game sometime. I didn't know NFA was an artist himself. Just really sux balls that I'll never get the chance to meet him now. If any of you guys ever want to get a beer (or whatever) let me know. I'll make the drive over.

Re: Not my best but was funny nonetheless

Sorry about your loss, man.

He'll always be a dirty hippy to me...

Basically because I've never seen another picture of him.
T

I own 28 of them. I have a beard that has been growing since Feb so it is fairly deep.

You should see the bro-in-laws beard. That chit is crazy. He's a prof at Ancilla College near here. Old Deadhead. I actually knew him before I knew my wife. Great guy. I've talked way too damb much about coming through and having a beer with you guys, but this chit with Andy has motivated me to quit phacking around and do it. Lemme know if you're ever up for it. Hell, we could make a trip to 3 Fs and meet up with HoopsCat.

I've spent 30 minutes tonight explaining the OTF-ish and the community I've been a part of since 2003 to the ol lady. She doesn't understand but knows that I put facking HOURS AND HOURS into this place.

I think I did pretty much the same*

That is older than dirt.

I live in Plymouth, IN.

The Mrs. knows about this place. Mostly because I'll lol and she'll ask about it. This whole thing hit home so close to me because of my own experience with a widow maker and surviving it. It's pretty upsetting, but at the same time makes me feel so fortunate. I'll be honest, there were some tears watching the game last night with my youngest son, who if I had died, wouldn't even be here. My email is:douglasbougher@gmail.com. Look forward to hearing from you,Phish.