There was talk of getting a big head of the bee costume made to use at the basketball games. I think it would be fitting tribute. I am curious if the athletic department would consider it now
Posted from Rivals Mobile

I think that would be awesome and not to mention it would totally throw off opposing players at the free throw line.
Posted from Rivals Mobile
I

If I remember correctly it wasn't possible.

The pic wasn't good enough and if it was blown up that big it would be pixelated.
Posted from Rivals Mobile
1

His disdain for the Today show crew

and Bell's Two Hearted.
B

"The Fight" with Martinsville....

and all of the grief he took over not jumping in.

I was looking at some old emails we had sent back and forth over the years.

Here is a quote he typed out a few years back:

"Andbetween you and me, I don't hate nipples. I have to take that stance on the board. Me loves me some nipples!!!"

lol yep I can hear him saying that

with a grin on his face.

Any artists on the board?

A painting of it, or some other rendering would be just as meaningful. It wasn't worth the effort at the time, but would have more meaning now. It would be distracting! Maybe it would be something his kids would like seeing, or would it be too painful? I would expect any memory would be happy and painful. I can't imagine losing my father at a young age. I am sure many on th board have faced that and would be better qualified to decide if this was even a good idea.

People would ask why there was a painting of someone in a bee costume. We could say it was Andy Russell, a hell of a good guy and someone that loved IU. My tickets are in the sections that have the bigheads and I typically don't like them. I would be proud to hold that one.

Get me the pic 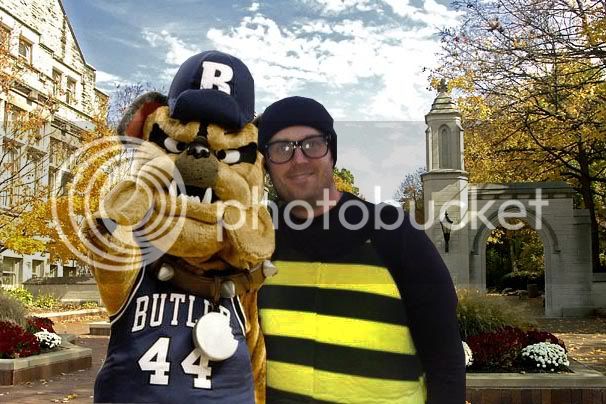 Years ago, while sitting in my office wasting an afternoon....


on the OTF, a brand new poster showed up who's handle was Aruss. New posters were always exciting because they were fresh meat and on a day when nothing much was happening, abusing them could really be good for some laughs get getting things going.

The new posters always handled it a few different ways. Many of them would be absolutely taken aback by the intense (and occasionally vulgar) hostility that people who didn't even know them were suddenly heaping upon them. Some would just leave after a few posts and never come back. Some, and these were the fun ones, would get indignant and start fighting back....but in all the wrong ways.

They'd attempt to reprimand people for their incivility or lack of "class". They'd threaten to contact PEEGS or they'd just come back with full blown flame assaults and attempt to intimidate their tormentors. All of this of course was just chumming the water and invariably it would turn into a full blown feeding frenzy. Good times.

This Aruss guy was different though. The day he showed up he was suddenly in every thread and participating in every conversation. He even started threads of his own which was unheard of from a newbie. The OTF, was kind of like the puzzled weasel looking at the strange mouse trying to attack it not knowing exactly what to do.

That didn't last long. Eventually the attacks began and these were attacks by some of the old masters, CJ, Basil, Spec, etc. but the more the intense the attacks more fun this Aruss guy was having. Not only that, he was being a NICE GUY the whole time. NOTHING was getting to him. It was as if he had made up his mind to join the family and he was happy to endure any initiation that needed to be endured.

From that day on, Aruss/NFA was a fixture on the OTF and eventually, in his own nice guy way, took effective control of it. He LOVED all the weird, evil **** that the resident morons (dolf, LL, Stunned, and others) would come up with and would even participate in it to a point but he never ever stopped being the nice guy that showed up that day.

I said in an earlier post that the day he showed up on the OTF was a good day for the OTF. It stands to reason that this is one of the saddest days. For the record, I think renaming this forum in his honor would be a very good thing.
D

That was one of my favorite topics. He took so much crap. nt

with a better resolution then blow that up? Or would that not work?
T

But his real name shouldn't be used. I can only imagine his kids doing a Google search one day and stumbling upon this hellhole by accident. That would scar them for life. Dws.


there would have to be some sort of mechanism for people to find out who the guy behind it is if they wanted to. Don't you think?

Is this the one that everybody's referring to?